Other About Us: Quotations 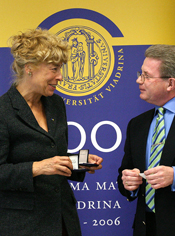 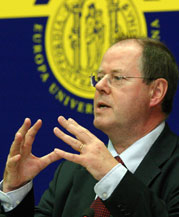 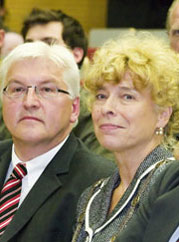 »The Viadrina University is a fantastic success. It demonstrates how outstandingly encounters and cooperation function in a Europe with open borders; in German-Polish relations, it is a pièce de résistance.«
Frank-Walter Steinmeier, German Foreign Minister (2006)

»This university, founded on the border, is a visible symbol of the Polish and German peoples’ return to a democratic Europe.«
Adam Michnik, Publicist (2000)

»European thought does not manifest itself anywhere more intensely – more concretely – than it does in Frankfurt and its European University Viadrina.«
Peer Steinbrück, German Finanz Minister (2007)

»Young adults are currently meeting at our university, and they are forging a new future for the area near the German-Polish border – a future, in which friendly handshakes and common proximity will become superordinates. «
Jerzy Buzek, Prime Minister, Poland (1997)

»We can find joy in the fact that we have a university with short paths, minimal bureaucracy and a ‘can-do’ mentality. These traits sum up Viadrina’s dynamic.«
Christian Hodgson, AStA President (2006)

»That which is truly European about the European University Viadrina is the claim made each day in our lecture halls, seminar rooms and libraries that the Oder River no longer divides but rather connects – that Europe does not end at this river. In this regard, Viadrina is a bit ahead of the European Union; however, we would gladly be caught up to.«
Prof. Dr. Hans N. Weiler, first president of the university (1996)

»It was already evident in the years preceding the EU-expansion that numerous regional, multiregional and international firms have a large demand for internationally oriented and interculturally educated students and graduates.«
Ulrich Junghanns, Brandenburg’s Economic Minister (2006)

»I am convinced that Viadrina is on the right path, and that it will accomplish its contribution to the expansion of the house of Europe.«
Roman Herzog, German President (1995)

»A vision is beginning to become visible reality - the building of the house of Europe - of which many in Europe have dreamt of this centure... Within a short period of time, the unimaginable has been achieved here. With great dedication, this university was founded in an era of great change; it was founded as a symbol of European thought and a new beginning. This achievement is of immesaurable value.«
Helmut Kohl, German Chancellor (1997)

»It is at institutions like Viadrina where a new transeuropean society will emerge; this new generation will be aware of intercultural differences, seek after common solutions and remain frank with its counterparts.«
Marek Prawda, Polish Diplomat (2006)